This week’s cyclone threat in North Queensland and severe storms in the southeast drove home to me just how far councils have come this century in their disaster preparedness and response.

Queensland - indeed Australia's - record in dealing with natural disasters is exemplary. The best in the world is what I hear regularly from our insurance underwriters in London.

And as the longest-serving member (ex officio) of the Queensland Disaster Management Committee – just over 20 years - I can say with a great degree of certainty that our 77 councils serve their communities extremely well.

My first experience with cyclones and councils was in 1986 - back in my Canberra days when I accompanied Federal Ministers Tom Uren and John Kerin on RAAF Hercules to FNQ after Cyclone Winnifred battered the then Johnstone and Cardwell shires (which merged to become Cassowary Coast) and the Mulgrave Shire (now incorporated into Cairns).

While federal, state and local governments were professional and committed to the task, it’s fair to say that plans and processes were rudimentary. Much depended on council engineers and local police. It truly was a case of batten down the hatches, pray and hope for the best. It’s also worth remembering that a lot of the houses and infrastructure of the time didn’t meet Category 5 cyclone ratings!

I had my first personal experience of cyclone preparedness in Townsville in 1989, as a newly-minted 30-year-old Deputy Town Clerk with six weeks’ experience in NQ. I had been left in charge for a month while my boss went on holidays when a relatively late (April) Category 3 Cyclone Aivu glanced Townsville and smashed through the top end of the Burdekin Shire in the Brandon and Clare areas. Things were going really well until the head of the RAAF at Garbutt Base told me late the night before the cyclone was due to hit in the morning that it was far too unsafe to leave his valuable aircraft in Townsville … fortunately, we all survived!

Move forward to this century and the likes of Professor Jim McGowan AM, the former head of Queensland Emergency Services, who really drove Queensland forward with properly-integrated disaster planning, response and recovery strategy, legislation, plans and capability - all the while treating councils as valued and genuine partners.

Cyclone Larry in 2006 was the first real test of the new state-wide model based on Local Disaster Management Groups (LDMGs) led by the Mayors and it passed with flying colours, with great credit going to the then Johnstone Shire elected members and staff. It was a massive natural disaster and an equally massive rebuild led by Sir Peter Cosgrove. Great learnings were taken from that experience and I recall the leap in cyclone and flood planning across the state that occurred in subsequent years.

As an aside, I vividly recall being at a planning session at the then SES Headquarters at Kedron when we wholeheartedly dismissed an all-of-state disaster scenario as improbable. (The notion of Force Majeure – “an act of God” - is indelibly imprinted on my mind!).

As you know, it turned out to be a one-in-a-thousand-year event across the length and breadth of Queensland, with 78 per cent of the state disaster-declared. It was epic, biblical - call it what you want – but Queenslanders prevailed! Had we not had the then robust Emergency Management System in place, things could have been far worse, not for a minute forgetting the 35 souls who lost their lives.

Importantly, the subsequent Holmes Commission of Inquiry into the event delivered us with an even better system which has enjoyed bi-partisan political support. Councils alone have spent circa $30 million on early-warning telemetry, communication and hydrological modelling systems to help combat risk. Moreover, hundreds of millions of dollars have been spent by councils on risk mitigation, gladly acknowledging the significant federal and state funding support of those initiatives.

Of course, all these disasters gave rise to the incomparable Queensland Reconstruction Authority, a truly world-class organisation that has put Queensland “back together” on a number of occasions over the past decade.

After each disaster, the councils and state governments have thoroughly debriefed and further improved the model. I think particularly of the establishment of the independent Office of the Inspector General of Emergency Management, to give us quality assurance.

All that said, it’s the councils and local communities that stand as the last sentinel and first responders whenever natural disasters happen. You’re first into action and still there when all the other helpers have left. Indeed, all disasters are local so it’s only right and fitting that the LDMGs are at the centre of our state’s Emergency Management System. I give great credit to successive premiers and their governments for holding on to that model in a wholly unified and apolitical manner.

The capability and competence of Queensland local government in all aspects of disaster management is quite extraordinary – in fact, light years from where we stood at the turn of the century!

And finally, an update on the current Queensland Covid-19 Activation Status - as per information of the SDCC - Emergency Management System. I'm sure many will appreciate this blessed relief from the Pandemic, lets hope its ongoing , the vaccine is a success and things continue to improve on both the health and economic fronts through 2031. 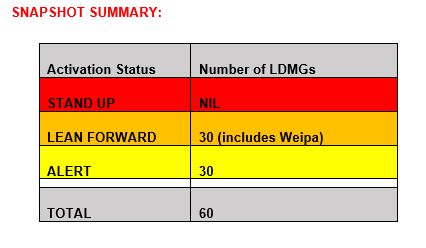