Best of regional journalism in the spotlight

The economic and social toll of Queensland’s ongoing drought, the battle for fairer airfares for people in the state’s regions and concern over the welfare of Pacific Islander workers are among the issues tackled by the finalists in the running for one of Australia’s richest journalism prizes.

Each year the Local Government Association of Queensland commemorates the work of John Bean, Paul Lockyer and Gary Ticehurst, a deeply respected media crew who died in tragic circumstances in 2011.

The LGAQ issues an award for excellence in regional journalism and to encourage other journalists to adopt the doggedness and professionalism that Bean, Lockyer and Ticehurst showed in pursuing their craft. 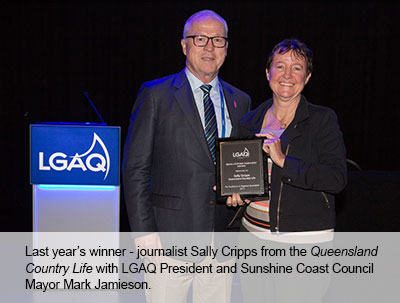 The finalists for this year’s $15,000 Bean Lockyer Ticehurst Award for Excellence in Regional Journalism are:

The winner will be announced at the LGAQ’s annual conference in Brisbane on 29 October.