Cairns Regional Council (CRC) has implemented the largest wayfinding trail in an Australian regional city with 300 braille and tactile signs placed strategically throughout the CBD, the hospital precinct and school crossings.

Braille and tactile street name signs exist as a service in the CBDs of Brisbane, Sydney and Melbourne, assisting people with vision impairment, mobility device users (whose sightlines are lower than ambulant pedestrians) and visitors. In Queensland, that service—which was previously confined to Brisbane—has been extended to Cairns.

The signs are located above each pedestrian crossing button and are aligned with the direction of travel so a person who is blind or has low vision can orientate themselves and know the name of the street they are traversing.

This project goes beyond supporting people with vision impairment and assists everyone in an inclusive manner by letting people know at a glance which street they are travelling along, which is particularly important for visitors to the region, as well as people who use mobility devices as they can concentrate on the ground surfaces they are traversing.

The signs provide a direction, and at the terminations of a street, provide a destination. The signs consist of the following elements:

The project consultation process was conducted with the membership of Vision Australia Cairns, made up of several members of the vision impaired community.

Discussions included the placement of the signs, and the orientation of the Braille and tactile lettering.

Further consultation was conducted with the City of Sydney and Brisbane City Council, which resulted in what is currently in Cairns—a best fit for Cairns that’s simple and allows consistency between cities. 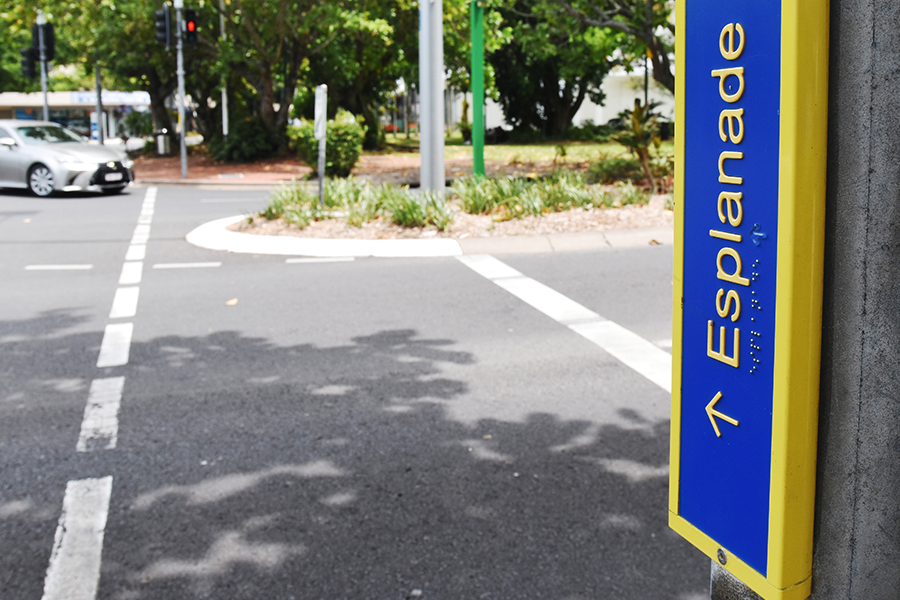 The Cairns wayfinding signage pointing to the Esplanade

Once a final design was completed by Shapemakers in Brisbane, CRC went to full production.

The four phases of the project that delivered nearly 300 signs across the region cost $61,000 for the signs.

The installation by one of Council’s electrical contract firms was approximately $15,000. Brisbane and Sydney used steel bands to install their signs to the poles, whereas in Cairns, the contractor used an anti-tamper tech screw, which is neater and colour matched to the powder coated frame.

Since installation, there has been no reported vandalism or attempted thefts of the signs.

The signs have made significant difference in the lives of people with disability within the Cairns local government area, and CRC has received positive feedback from locals and visitors to the region.