Even before the act of Federation created modern-day Australia, local governments across Queensland saw the value of a united voice. Established in 1896, few organisations have endured for as long as the Local Government Association of Queensland (LGAQ). We take a look at the history of local government in Queensland, its major trials and victories, and the Association’s role throughout the century-and-a-quarter of its existence.

The Municipal Institutions Act 1864 repealed the previous Act and gave municipalities the powers to charge rates, borrow money, enact bylaws, regulate and control public infrastructure and utilities, and provide public amenities such as gardens and hospitals.

Early settlement throughout Queensland was largely focused around industry, resulting in huge distances between new towns and huge variations in their size. Lack of communication technology as we know it today meant a peak body to represent the collective interests of this diverse level of government in Queensland was imperative. 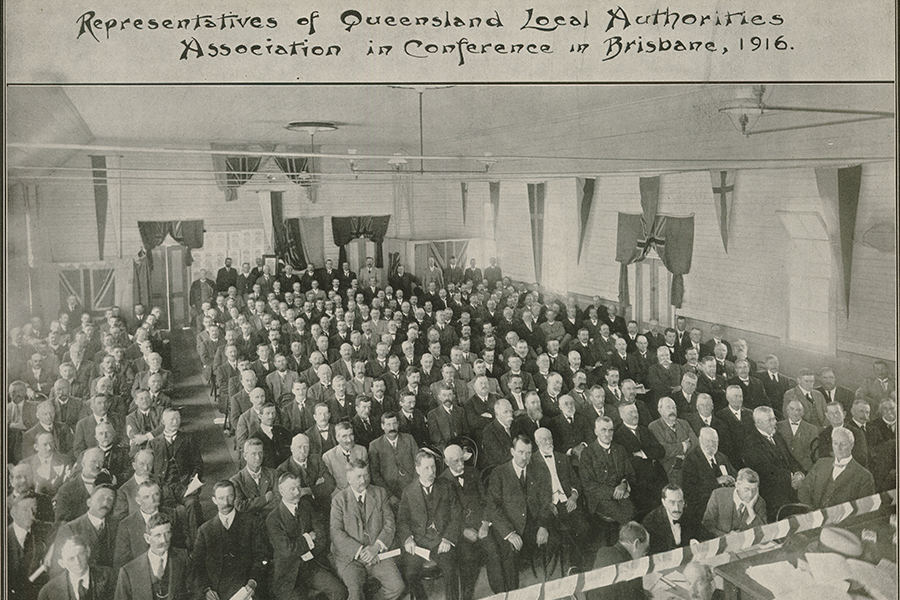 The Brisbane Courier reported in 1897 that the Local Authorities Association—the first iteration of the Local Government Association of Queensland—set in clear light the evils of parochialism.

“The arguments for the federation of the colonies stand out more clearly on the smaller scale of the association of our local authorities. It gives us, for one thing, the strength of all behind each,” the article reads.

“One of the objects is to take action in relation to any subject affecting local bodies in local legislation.

“It needs no penetration to see that such action is far more easily taken and far more likely to be efficient when coming from the association than from local bodies merely.

“Just as we want the colonies to be able to speak and act together under federation, and impress the world with the greatness of Australia as can never be done with separate voices, so we want our local authorities, who separately are as voices crying in the wilderness, to make impression on the Government and country by speaking and acting together on ever-recurring questions of general interest.”

Just four years later with the federation of Australia on 1 January 1901, the same newspaper reported in March that the work of the Local Government Association “deserves hearty recognition at the hands of the ratepayers of Queensland and the best way to give it place and power is to widen its circle of influence.

“Already, the state is fairly well covered by its operations. That is to say, the local bodies which have joined the Association represent many of the best of our Councils and Boards…

“The very fact that our principal local bodies are brought together and exchange ideas is worth a great deal, especially when we know that the great drawback to local government in this State is a lack of facilities or intercourse.

“With the proposed amendment and consolidation of the laws relating to local government, the Association becomes more and more necessary to the ratepayers at large.”

The current system of local government we have today, based on cities, towns and shires, was introduced with the Local Authorities Act 1902, which consolidated and amended the existing laws relating to local government.

The issue of the size of different councils within Queensland has been ever-present. In 1928, a Royal Commission was launched into reducing the number of local government areas—in this instance from 152 to 86.

Scholar C.P. Harris writes, “The Royal Commission viewed a local government area as a district within which the interests of the people were similar socially, industrially and commercially, and saw a need to create ‘units of local government sufficiently large to give that financial stability requisite to enable them to efficiently function and administer to the requirements of modern means of transport, in addition to providing adequate service in respect of water, lighting, noxious weeds, health, and other matters’.”

Indeed, a significant win of the LGAQ in the 21st century was the creation in 2007 of the Local Government Reform Commission, which was instigated by the LGAQ, concerned about local government sustainability. Gabrielle Walsh asserts in 2004 the LGAQ promoted discussion of reform amongst member councils at its Annual Conference. Shortly thereafter, the LGAQ Executive resolved to initiate a major reform project. The ‘Size, Shape and Sustainability (SSS)’ discussion paper was disseminated by March 2005, and early indicators were it had State Government support.

The President of the LGAQ at the time, Cr Paul Bell AM, said there needed to be some significant reform in local government.

“We were too many councils,” he said.

“We were too disparate in our boundaries, our sizes, and shapes, and we weren’t meeting the needs of a new modern Queensland, which had changed with rapid growth and expansion over the last 15-20 years. We had to change.”

Financial reviews prepared for more than 100 councils revealed significant financial sustainability issues, which led to the amalgamations of smaller, typically rural councils (with small populations) that were originally established to serve industry in the area, into regional councils.

One of the great achievements of Queensland—and Australian—local government over the past two decades is the manner in which it has overhauled its internal functions and processes.

Scholars Brian Dollery and Neil Marshall state that councils have “restructured their organisational frameworks to cater for the outsourcing of services, developed commercial capabilities to compete in the business arena, adopted an orientation towards outcomes as opposed to inputs, and introduced a range of corporate strategic practices.”

These have been so effective, they write, that Australian local government has emerged as an international leader in the new managerial style. In Queensland, community tracking surveys conducted by the LGAQ from the 1990s to the present reveal high levels of satisfaction with local government.

Respondents to the surveys expressed greater confidence in their councils as a service proviFder than other spheres of government.

This analysis from the LGAQ provides valuable insights for local governments to continue service provisions for their local government areas, as well as adapt to and learn of the desires of their communities.

Outgoing LGAQ CEO Greg Hallam AM, who has spent 29 years in the role, said for the Association, it’s about creating and enduring.

“The political cycle revolved around every four years—a change of government,” Greg says.

“I’ve had some really big wins for things like the ambulance levy and the performance dividend voted down, and, more recently, we fought against compulsory preferential voting, but to me the biggest thing that I’ve done here is road reform.

“Roads are first, second, last and in the middle for councils. I took great pride in being the first and only person in local government to win Roads Australia’s highest award, the John Shaw medal, and the work that Neil Doyle and I did together was recognised at an OECD level and through the International Road Federation.”

In 2017, the Local Government Association of Queensland was recognised as a Queensland Great for its service to the State. The Association’s long and proven history as an innovative and ground-breaking policy development body is a strong foundation for the next 125 years of dogged advocacy for its 77 member councils.