The Red Bench Project: Changing the ending to domestic violence

The Red Bench Project was launched in 2019 by the Red Rose Foundation, encouraging the installation of red benches as permanent reminders that domestic violence occurs within our communities—but that we have the power to ‘change the ending’.

Betty Taylor, founder and director of the Red Rose Foundation Queensland, is a domestic violence advocate who has worked across the sector for more than 30 years. Betty was instrumental in the establishment of the Australian Institute for Strangulation Prevention and a partnership with the Training Institute for Strangulation Prevention in San Diego. Putting non-lethal strangulation on the public policy and law reform agendas is just one of her significant achievements.

In 2020, Betty was named a Queensland Great by Queensland Premier Annastacia Palaszczuk, in recognition for her long-term contribution and achievements that have significantly impacted the history and development of Queensland.

We took this opportunity to interview Betty and ask about the Foundation and her vision for the future of domestic violence campaigns like the Red Bench Relay.

What drove you to create the Red Rose Foundation?

I have worked in various positions during my 30 years in domestic violence prevention, and in 2002 I had the amazing privilege of being awarded a Churchill Fellowship to study collaborative and integrated responses to domestic violence in the USA and Canada. During the Fellowship, I met people doing ground-breaking work addressing high-risk domestic violence through a specific focus on domestic violence death reviews and non-lethal strangulation. My partnership with the Training Institute for Strangulation has continued and grown over the past 19 years.

It is our belief that domestic violence deaths are largely predictable and preventable—and this is now supported through death review reports and research.

Through successful lobbying, we established both the death review board and a standalone strangulation offence, implemented through the recommendations from the ‘Not Now, Not Ever’ report. However, victims of domestic violence are sadly still being murdered or suffering life endangering injuries, both physical and psychological, which can have long-term consequences.

It is my hope that the Red Rose Foundation can help make a difference.

What does the red rose signify?

The red rose was originally adoptedfollowing the murder of a Sydney woman, whose ex-husband left red roses on her body after murdering her. While we see red roses as a sign of love, they can also be used as symbols of distorted love.

What is the goal of the Red Rose Foundation?

Of course, we would like to see the end of all domestic and family violence, however, we know that many people experience levels of high risk, high harm that others do not. By focusing on some of the significant high-risk issues—specifically strangulation—we are hoping to make a difference.

What do you see for the future of the Red Rose Foundation’s Red Bench Relay?

The Red Bench Relay is a wonderful initiative of the Local Government Association of Queensland (LGAQ) that brings communities together across the state to raise awareness through a positive and inclusive event. I believe it has huge potential to grow and involve other organisations that have red benches.

The number of organisations with red benches is now growing to include schools, sporting clubs and police.

The Red Rose Foundation’s inaugural Red Bench Relay took place in November 2020, marking the beginning of an annual domestic violence education campaign. Queensland councils, as well as the LGAQ, took part in ‘walk against violence’ events in a bid to change the ending to Domestic and Family Violence (DFV) within our communities. 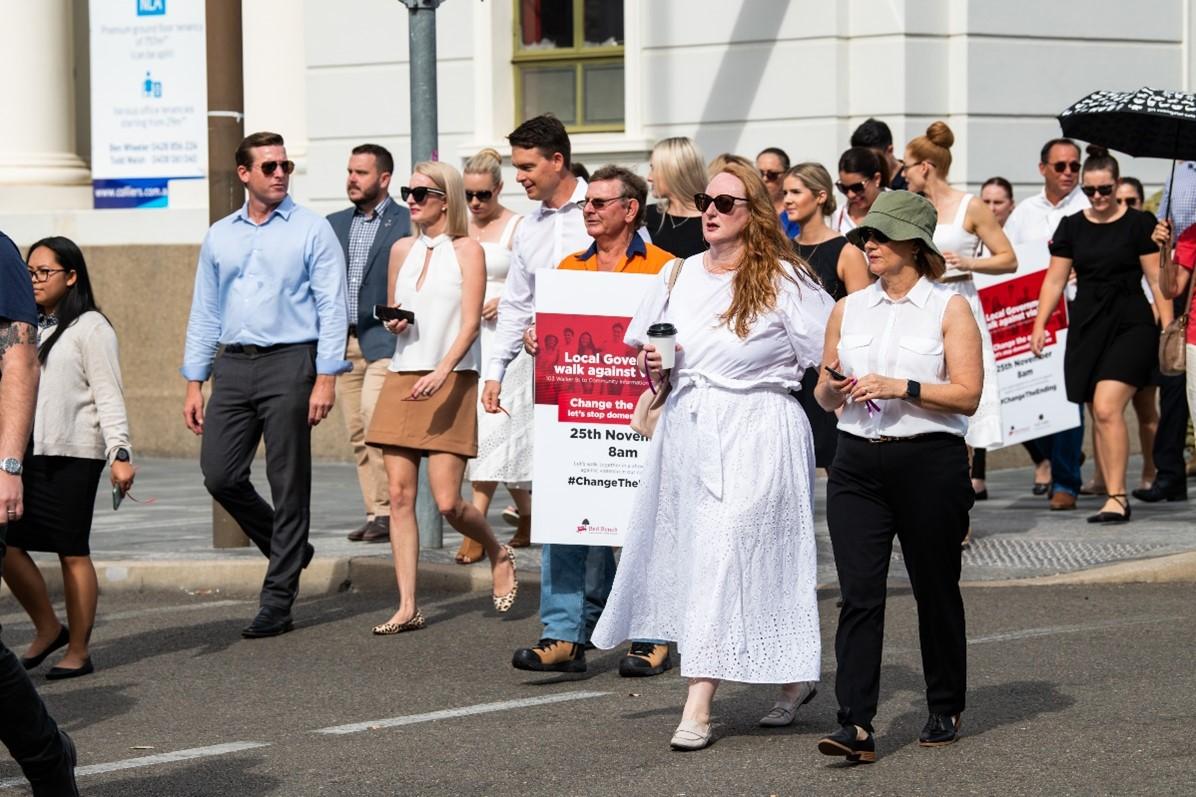 Townsville participating in the walk against violence

Boulia Shire Council participants wore red shirts and hats and concluded with a morning tea at the Shire Hall.

Bundaberg community members put on their joggers and gathered at Bundaberg’s newest red bench at Alexandra Park to take a stand against domestic violence. Bundaberg now has four red benches, and the participants made their way through the CBD before meeting for a prayer service and a moment of silence. 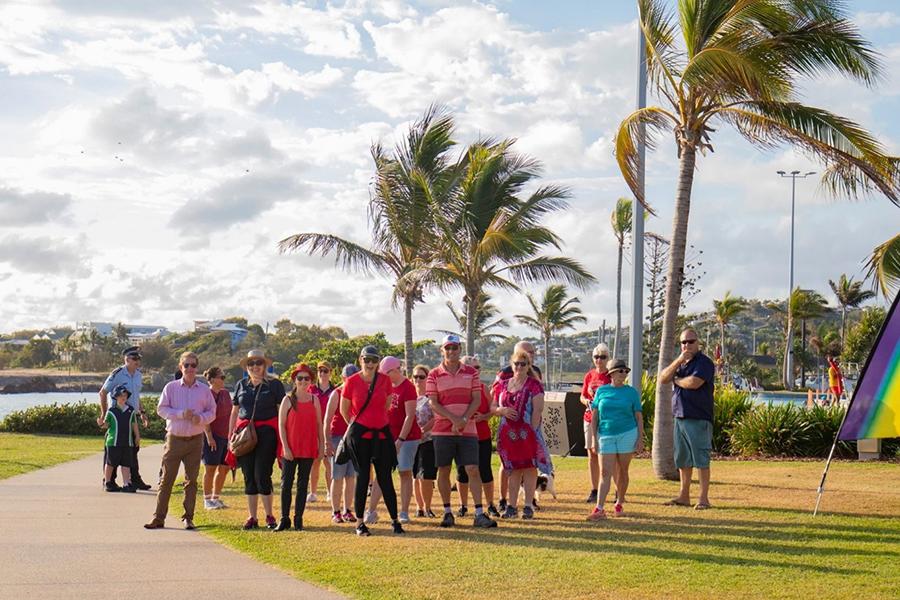 How can councils get involved?

As part of our wide-ranging commitment to raising awareness of the issue, the LGAQ introduced the Red Rose Foundation’s goal of having at least one red bench in each Queensland council area through the Council Showcase session (with red bench onstage) at the 2019 Annual Conference in Cairns. You’ll find a red bench—with the all-important ‘Domestic Violence: Let’s Change the Ending’ plaque—outside Local Government House in Newstead and you’ll find red bench guidelines and other resources for keeping this important issue visible in your community at redrosefoundation.com.au. 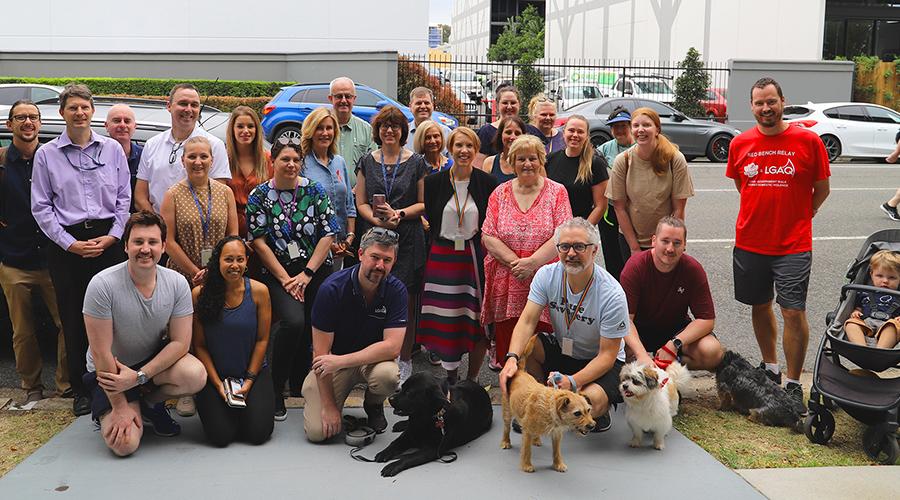 The LGAQ team gathered in Newstead for the walk against violence