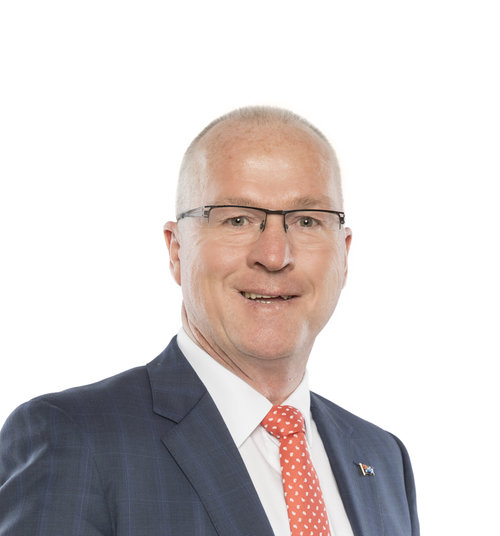 First elected in 2012, Mayor Mark Jamieson is currently serving his second term as mayor of Sunshine Coast Regional Council. During his first term, Mayor Jamieson led the development of a 20 year blueprint for a new economy for the Sunshine Coast, as well as the implementation of a new planning scheme.

Prior to his election as Mayor in 2012, Mark Jamieson enjoyed an extensive career in chief executive and senior leadership roles in the private sector, with both strategic and operational responsibilities for customer satisfaction, staff development, business performance and shareholder growth.

Mayor Mark Jamieson was elected as president of the Local Government Association of Queensland at the 120th LGAQ Annual Conference and will hold the position for four years. The President of the LGAQ is also by virtue of their presidency chairman of the LGAQ Board and Policy Executive.

The LGAQ Board is responsible for the operation of the business of the company. The Board of four Directors consists of the President elected by the member councils at the Annual General Meeting following the quadrennial council elections and three other Directors elected by and from members of the Policy Executive.

Townsville City Council's first female mayor, Cr Jenny Hill, believes in focusing council on developing the city as not only Queensland's second capital, but also as Northern Australia's premier city. This is Cr Hill's second term on the policy executive, a role which allows her to represent the interests of the Burdekin, Charters Towers, Hinchinbrook and Townsville regions.

Responsible for the determination of the Association's policy on behalf of member councils, the Policy Executive consists of 15 district representatives and the President. The Policy Executive meets 6 times per year to discuss and determine LGAQ policy.

Cr Mike Charlton commenced his local government service in 1994 when elected to the Pine Rivers Shire Council. Following amalgamation, Mike was elected to the Moreton Bay Regional Council in 2008, 2012 and again in 2016. Mike has served on all Council's committees during his 22 years as a Councillor and was elected as Deputy Mayor in May 2013 and again in May 2016 and is a passionate advocate for the role local government plays in our communities. This is Cr Charlton's first term on the policy executive and will represent the interests Moreton Bay Regional Council, Sunshine Coast Regional Council and Noosa Shire Council.

As Mayor of Redland City Council, Karen Williams is passionate about key issues impacting on the region. Cr Williams is a former small-business owner and member of the Australian Institute of Company Directors with a background in the domestic and foreign exchange markets. This is her first term on the policy executive, representing the southern SEQ councils or Redland, Logan and Gold Coast.

Councillor John ‘Jack' Dempsey was elected as Mayor of the Bundaberg Region on March 10th, 2016 after an extended period in Queensland politics. Cr Dempsey was formerly with the Queensland Police Force as well as the former State Member for Bundaberg. This is his first term on the LGAQ Policy Executive and he is representing the councils of Bundaberg, Fraser Coast, Gympie and North and South Burnett.

Mayor Matt Burnett has 16 years' experience in local government, including five years as Deputy Mayor prior to his election as Mayor of Gladstone Regional Council in 2016. Cr Matt Burnett is a born and bred Gladstone resident and his family's connection with the region extends to five generations. This is Cr Burnett's first term on the policy executive and he will represent the interests of Banana, Central Highlands, Gladstone, Livingstone and Rockhampton councils.

Townsville City Council's first female mayor, Cr Jenny Hill, believes in focusing council on developing the city as not only Queensland's second capital, but also as Northern Australia's premier city. This is Cr Hill's second term on the policy executive, a role which allows her to represent the interests of the Burdekin, Charters Towers, Hinchinbrook and Townsville regions.

Cr Bob Manning became mayor of Cairns in 2012. Awarded the Medal of the Order of Australia in 2004 for his service to the Cairns region community through the development of the tourism, marine and aviation industries, Cr Manning was Shire Clerk at Longreach for seven years before becoming CEO of the Cairns Port Authority from 1984 to 2002. This is Cr Manning's first term on the LGAQ policy executive and he represents the interests of the Cairns, Cassowary, Cook, Douglas, Mareeba, Tablelands and Torres councils.

Greg has served as LGAQ CEO for 26 years, during which time he has visited every settlement across Queensland. In previous years, Greg has worked in the Federal Treasury, the National Office of Local Government, Esk Shire and Townsville City councils as a senior executive. He is currently a director of several LGAQ subsidiary companies and was previously a long-term director of the Queensland Treasury Corporation.

Greg was awarded the Public Service Medal in 2000 for his contribution to local government, and the Centenary Medal in 2001.

In 2018 Greg was recognised for his significant service to local government administration, natural disaster recovery efforts and to people with disabilities and appointed a Member (AM) of the Order of Australia in the 2018 Australia Day honours

As General Manager of Advocate, Sarah leads the Association’s policy, media and campaigning arms. With extensive local government experience, Sarah most recently held the position of Deputy Director General, Strategic Policy and Intergovernmental Relations in the Department of Premier and Cabinet. In 2018, she was awarded a Public Service Medal for her contribution to public service in Queensland.

In his role as LGAQ CFO, Darren oversees a team of finance and governance professionals. He leads the development and preparation of financial and accounting information for management and board for LGAQ as well as its subsidiaries according to relevant financial standards and legislation.

Darren has also held managerial roles of KPMG in numerous areas from general tax to superannuation advisory. Darren has been with the Association since 2007

As General Manager of Assist, Glen leads the member and support services that provide daily guidance and assistance to those working in and leading Queensland’s 77 councils. Originally a primary school teacher Glen’s early career was in the education sector where he worked with private, public and international schools, TAFE and within the tertiary sector.

Whilst completing his first Masters’ degree in experiential learning he lectured at Griffith University for both the Education and Behavioural Sciences Faculties.

He has been with the Association since 2001and currently leads several major projects for the LGAQ, including LG Sherlock, a big data initiative for local government.