A series of comprehensive reports detailing the bad deal regional air passengers receive from airlines has taken out the prestigious LGAQ Bean Lockyer Ticehurst award for excellence in regional journalism for 2018.

The series, by editor of the Mount Isa based North West Star newspaper, Derek Barry, detailed the punishingly high cost of airfares that many passengers in regional Queensland are forced to pay.

Backed up by solid reporting on the parliamentary inquiry into regional airfares and some hard-hitting editorials, the series was the stand-out in a large and quality field of entries to this year’s award.

Local Government Association of Queensland chief executive Greg Hallam said Barry’s work on the issue highlighted a problem that regional Queenslanders had been suffering for years.

'It’s simply unfair that some regional passengers have to pay more than some international fares to fly domestically,' Mr Hallam said. 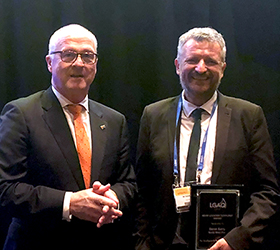 'Derek Barry took up this issue with gusto and has put pressure on the airlines not to price regional Queenslanders out of a fair deal on fares.'

The award, established by the LGAQ, was presented to Barry at the Association’s annual conference in Brisbane tonight.

The award, which comes with a $15,000 cash prize, commemorates the work of John Bean, Paul Lockyer and Gary Ticehurst, a deeply respected media crew who died in tragic circumstances in 2011.