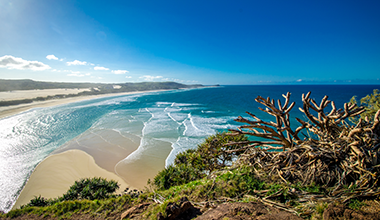 However, its liveability is built around more than just its natural beauty – which is why Fraser Coast Regional Council is adding its voice to the national call to restore Financial Assistance Grant funding to councils from the Federal Government back to at least one per cent of taxation.

“Financial Assistance Grants (FA Grants), funded by the Federal Government are an absolutely vital source of income to council budgets,” he said.

“It’s the funding that keeps the lights on in libraries and the gates open at the local waste facility. That helps replace major infrastructure, and builds community pools, parks and playgrounds right across the nation.”

FA grant funding used to represent one per cent of federal taxation, back in the 1990s.

The reduction has meant local councils and communities have been left behind as the roles and responsibilities of local governments have risen.

“A relatively small increase back to one per cent would grow the pie across the local government sector – meaning that communities everywhere in Queensland would benefit,” Mayor Seymour said.

“Communities like ours deserve to be able to look to the future – and councils need funding certainty to plan and execute vital services and infrastructure at a local level.”

Mayor Seymour said Fraser Coast supported the national local government sector’s call for the funding increase ahead of the Federal Election because no local community deserved to be left behind in 2022.

“Regardless of location, all communities deserve to be liveable places for current and future residents and visitors in this day and age,” he said.

“While we appreciate the funding support we receive from other levels of governments through programs such as the Hinkler Regional Deal and the Works for Queensland program, FA Grants are in urgent need of review this election.

“In addition, 21 per cent of local children are developmentally vulnerable compared to the Queensland average of 12.3 per cent and the national average of 9.6 per cent.

“With statistics like these, regions like the Fraser Coast need more support from other levels of government, not less, to provide the infrastructure and services our communities need.”

Queensland councils are seeking a Federal Election commitment to restore Financial Assistance Grants back to at least one per cent of Federal taxation – a small ask that will go a long way toward improving the liveability of Queensland’s local communities.