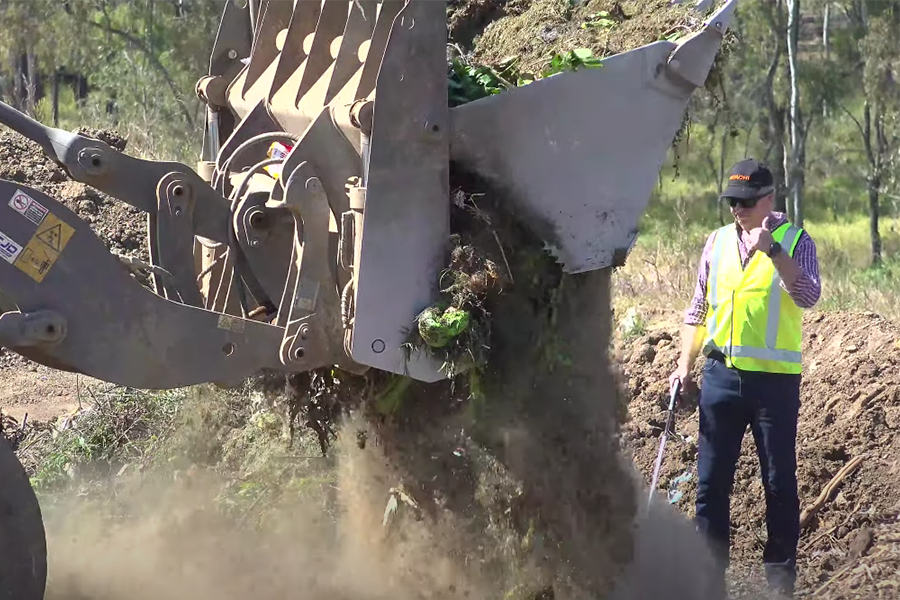 According to Queensland Environment Minister Meghan Scanlon, food organics and garden organics make up about half of the general waste bin that households place on the kerb each week.

“This not only adds to the amount of waste going to landfill, but results in an enormous amount of otherwise valuable waste being … wasted,” Minister Scanlon said.

The FOGO trials aim to recover these organic materials that are being sent to landfill and processing them to make compost, which can then be used to improve soil quality in a number of practical applications.

In the trials, households are issued with a FOGO bin, in which residents can put food scraps and green waste, including fruit and veg, meat and bones, pasta, cooked food and leftovers, paper towel, and lawn clippings, twigs, weeds and more.

In Townsville’s trial, the council area has already seen the 1500 participating households divert 45 tonnes of waste from landfill by sending it to local businesses McCahill’s Landscaping supplies and Atlas Soil for processing after council collection.

At Atlas Soil, FOGO waste has been turned into “HumiSoil” – a propriety product that reduces watering needs, reduces nutrient use, and increases food productivity in cities and agriculture.

Atlas Soil Co-Founder and Director Jason Lange said the company is passionate in its desire to turn local waste into high-value soil products and a brighter environmental future.

“With the FOGO trial delivering a resource stream of organic garden waste, we can use our understanding of soil structure, soil chemistry and soil biology to make a product that protects and strengthens soil properties in the wider environment from agricultural uses to uses in parks and gardens,” Mr Lange said.

Townsville Mayor Jenny Hill said at the end of the trial (late 2022), Townsville City Council will use the data it gathers about the collection types and frequencies to determine what its next step as a city will be, and what infrastructure and method it will implement to reduce the city’s waste to landfill.

Mayor Hill also said education on how to efficiently use the FOGO bins was a crucial component of the trial.

“The trial is vital for council to explore the best and most effective methods to reach our aspiration of zero waste to landfill by 2030 and to meet the goals of the Queensland Government’s waste strategy,” she said.

Lockyer Valley Regional Council faces the issue of its Gatton Landfill nearing the end of its landfilling capacity. When landfilling is no longer an option in the Lockyer Valley, council will be faced with increased transport costs and fees to take waste to a facility outside the region.

That’s one of the reasons why Lockyer Valley is trialling FOGO, so that these costs don’t get passed down to ratepayers.

The Lockyer Valley of course also contains prime agricultural land, so valuable organic material can be used in the soil rather than landfilling it.

Lockyer Valley Regional Council Waste Coordinator Christine Blanchard said over the next 12 months, the waste team will be monitoring the trial and making recommendations to council about potentially rolling the FOGO program out more broadly.

In Ipswich, council is conducting its FOGO trial for 1000 households in Bellbird Park and Raceview areas, where selected residents can’t opt out.

They’re provided with a 240-litre FOGO bin, which is collected weekly, and their general waste bin is collected fortnightly as opposed to weekly.

Ipswich Mayor Teresa Harding said the lessons learned from this trial such as participation rates, contamination rates, effective communication methods, diversion of waste to landfill and the changes to the waste and recycling bins will play a critical role in the introduction of a citywide FOGO service in 2023-2024.

FOGO trials are also in their infancy in Brisbane City and the Gold Coast.