For a day or so last November, Charleville—one of Australia’s most celebrated Outback towns—shed the name it has borne for 135 years and became ‘Kurtsville’, in honour of local State of Origin star Kurt Capewell.

What looked like a bit of local fun turned out to be a marketing masterstroke, generating hundreds of thousands of dollars’ worth of ‘earned’ print, radio, TV and online media, plus social platform shares from the likes of the Queensland Maroons—which has 927,000 followers on Facebook alone.

Murweh Shire Mayor, Shaun Radnedge, reckons it was a smart spend on a ‘Kurtsville’ sign ($300) and accompanying video ($1500) that has been seen right around the country and beyond.

“What an investment,” he says.

“It’s all about selling Charleville and the Murweh Shire and, I’ll be honest with you, to get Ray Hadley to call and want to talk about Charleville blows me away … those things only happen once, potentially, in a lifetime—let alone a political career.”

It turned out quite nicely for Capewell, too, who was a key player for the Maroons in his first Origin series and a 2-1 win over the Blues.

The man known to his community as ‘Zoro’ (more of which anon) has been Murweh’s mayor for a year and says his working relationship with council’s veteran CEO, Neil “Polly” Polglase, is a crucial one. 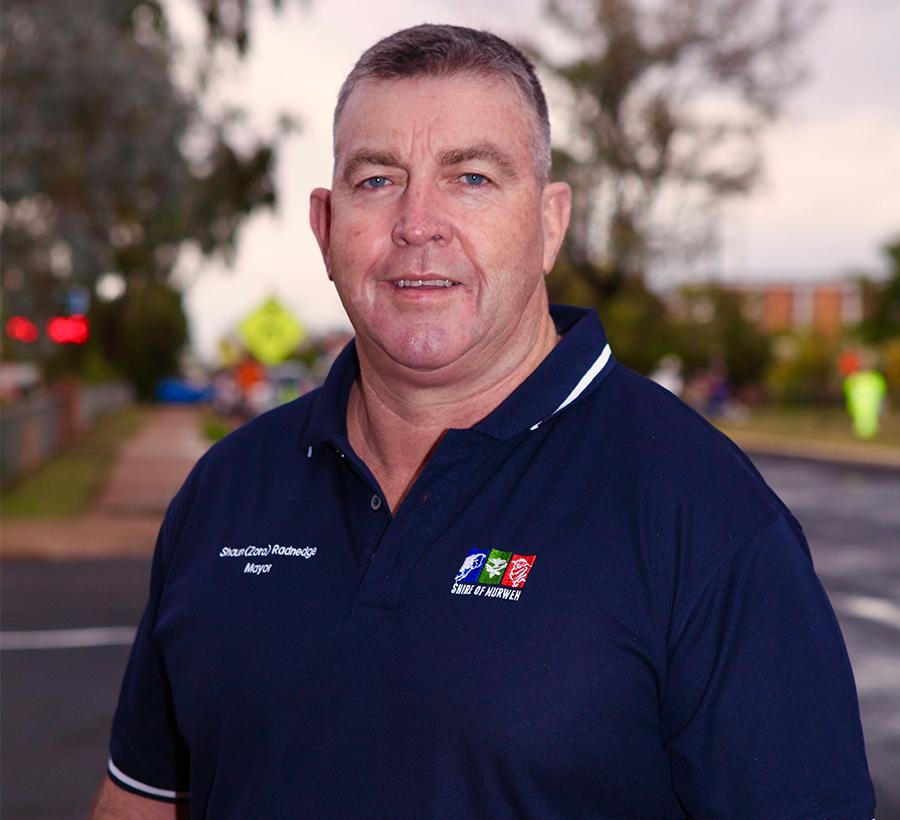 “We work well together because I do come up with some mad ideas and Polly is my sounding board; he’ll tell me pretty straight if it’s a good one or a bad one.

“But the biggest thing is that I want to give him the confidence that I look forward to working with him in that space—and to be learning off him as well—because with 38 years of experience in local government … that’s pretty hard to buy.”

The Mayor speaks highly of his colleagues in the South West Queensland ROC and he has been thorough in ensuring he’s also on good terms with Murweh’s partners in other levels of government.

“You really need to have that good relationship, so that when you call about an issue, they take you seriously,” he says.

“You can’t fix every problem, but I believe the relationship with the state and federal government … that’s how we get things done.”

Despite the drought that’s now in its ninth year, Mayor Radnedge—who’s also a butcher—is upbeat about the local agricultural sector’s growth prospects and he credits state and federal government support for the wild dog barrier fence as being vital for the region.

“What that’s actually done is give landowners security and they can go back to running their sheep, their goats as well as their cattle,” he says.

The reduction in stock losses has been a boon to producers and will further bolster the region’s economy.

“Our biggest asset is [sheep and goat processor] Western Meat Exporters and they employ 140 people at the moment. With that [supply chain] security the agricultural sector has, they can value add with their product and the State Government has partnered with them in a $9 million expansion that will create 60 new jobs at the facility by March 2022.

“Sixty jobs mightn’t sound much to you, but that’s the equivalent of 5000 jobs on the coast.”

The Shire sits wholly within the Mulga Lands—a bioregion larger than the United Kingdom—and agriculture has long been the wellspring of its economy. Murweh is one of a handful of local government areas that is still in use from the 74 created by the Divisional Boards Act 1879, which was intended to see communities funding their own local roads and bridges. The shire’s boundaries have changed in the intervening 140 or so years and the region’s largest population centre, Charleville, was a separate entity with its own town council from 1894 to 1960.

Gazetted in 1865, Charleville was named—after a town in County Cork—by the Kennedy and Warrego District Commissioner of Crown Lands (and later Queensland’s second Surveyor General) William Alcock Tully. The town of Tully, and the Tully River, still carry the Irishman’s name to this day. 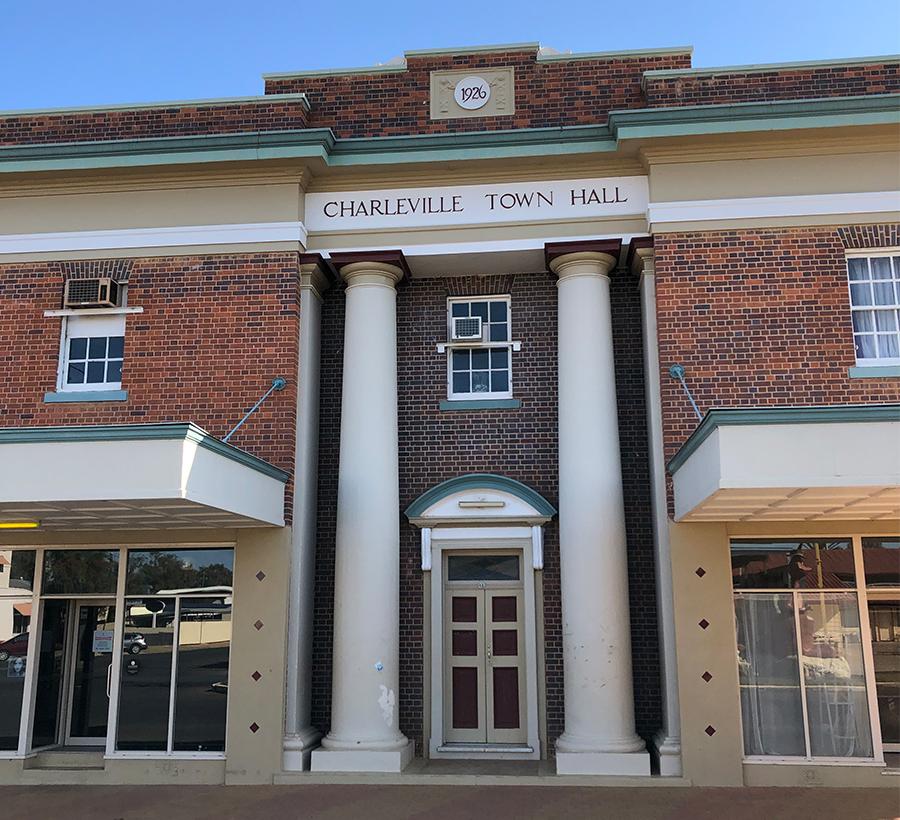 Tully also oversaw the layout of Charleville’s famously wide streets, designed to allow teams of bullocks “up to 14 pairs strong” and their wagons to turn with ease.

Charleville was to become crucial to the horse-drawn operations of Cobb & Co, first as a staging post and then as the site of a large carriage works, established in 1886, less than 20 years after the coaching pioneer commenced its Queensland operations.

The Charleville facility built a variety of vehicles —including more than 120 coaches—but shut up shop in 1920, by which time Cobb & Co’s services had been superseded by rail, air mail and the growing popularity of the automobile.

Australia’s last horse-drawn stagecoach run was the Cobb & Co service from Yuleba to Surat in August 1924. At its peak, Cobb & Co was running some 3000 horses more than 15,000 kilometres a week in Queensland but was finally consigned to the history books in 1929. Charleville-built stagecoaches are on show today at the Cobb & Co Museum in Toowoomba and the Powerhouse Museum in Sydney. 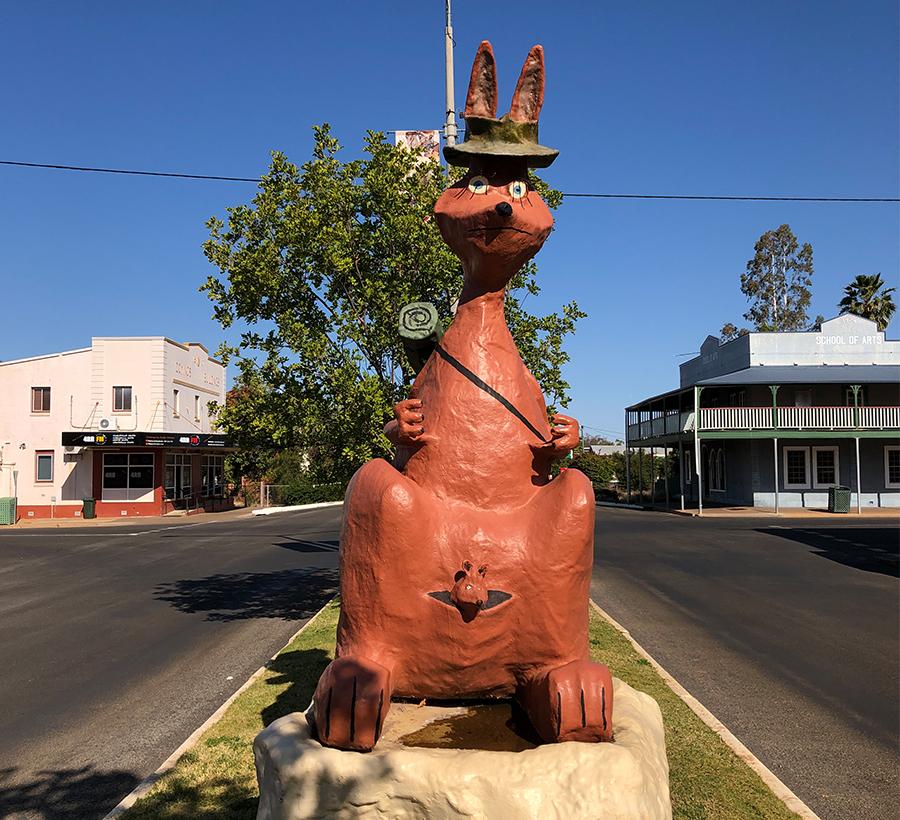 In 1942, Charleville’s airfield became a temporary base to some 3500 US Army Air Force (USAAF) personnel—plus Australian contractors, who had to swear never to speak of what went on at the airfield. Fortunately, (at least some of) it can be revealed today if you take the Top Secret WWII Tour, which takes in a bomb vault, bitumen baths and, of all things, the remains of a dance hall. A new interactive attraction opened on the site late last year in an enormous hangar, spectacularly recreating the wartime site, along with a 3D cockpit and Norden bomb aimer.

Mayor Radnedge says the airbase is ‘our biggest jewel in the crown’, now that military declassification is permitting the community to showcase it.

“It’s going to grow into something pretty big,” he says.

“We’ve got State BoR [Building our Regions] funding for the first stage, the second stage is a lot of interactives, and we really see the airbase being our value-add and that’s what we’re aiming at.”

Weaponry of an entirely different calibre is still on show in Charleville’s award-winning Graham Andrews Parklands, in the form of a Steiger Vortex gun, a five-metre-tall cone-shaped cannon that it was hoped could produce rain.

The guns were designed to prevent destructive hailstorms in wine growing regions of Austria—firing the Steiger created a discharge of gas which created vibrations in the clouds, causing rain (rather than hail)—and six of them were forged in Brisbane when Australia was in the grip of what became known as ‘the Federation Drought’.

Amid great community interest (and, you’d imagine, curiosity) in September 1902, the guns were set up in two rows, spaced over a kilometre apart, and fired at two-minute intervals. The drought remained unbroken and, as recorded by the National Museum of Australia, “[i]n 1892 Australia had 106 million sheep, two-thirds of which were in the eastern states. By 1903 the national flock had almost halved to 54 million. The nation lost more than 40 percent of its cattle over the same period, nearly three million in Queensland alone.”

There is a lot more to Murweh than ‘the ville’, which is close to the geographic centre of the 43,900 square kilometre shire and marks the western end of the Warrego Highway, some 683 kilometres west of Brisbane.

Morven, in the shire’s east, is the site of Sadlier’s Waterhole, which was once a resting point for those Cobb & Co bullock teams travelling to Charleville from Brisbane. A little south of Morven you’ll find Tregole National Park, home to the rare Ooline Tree, a peculiar—and spectacular— relic of the extensive rainforest vegetation that once covered much of the continent. That a rainforest species from the Ice Ages is still standing in these semi-arid conditions is one of Murweh’s most enduring mysteries.

As late as last year, Cooladdi, in the shire’s west, had a population of just three and can lay claim to being Australia’s smallest town. Cooladdi is home to a bar, pub, post office and accommodation … that are all conveniently located under one roof at the Foxtrap Cooladdi Roadhouse.

And Augathella, which is north of Charleville on the Matilda Way (1812 kilometres of fully sealed road stretching from Cunnamulla all the way to Karumba) and at the junction of the Mitchell and Landsborough Highways, is famed for its streetscape of beautiful murals and for being ‘meat ant country’. It’s home to the Big Meat Ant, a five-metre-tall sculpture that is … more than a million times the size of an actual ant.

All of Murweh is home to an attraction that is free to everyone and open all year round: truly awe-inspiring night skies. There is next to no light pollution throughout the shire and the clear, dark skies are a must-see attraction. Charleville’s recently upgraded Cosmos Centre offers visitors the chance to see moon craters, the rings of Saturn and spectacular views of the Milky Way. 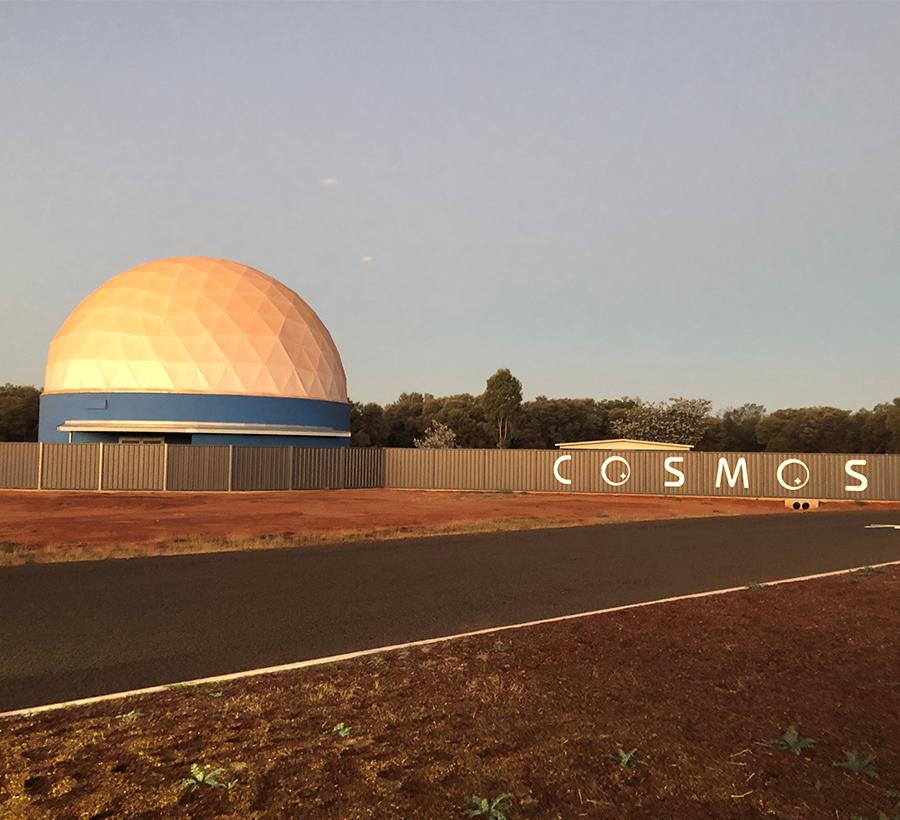 As it happens, the Bidjara people, traditional owners of much of the country around Charleville, have a dreamtime story of the Goori Goori bird, a flesh-eater that was larger than a wedgetail eagle and lived at the headwaters of the Warrego River. To drive the Goori Goori bird away, Bidjara Elders lit a fire under its nest while it was asleep; as its legs caught fire, the bird flew off and left a trail of sparks and burning feathers that formed the Milky Way.

Mayor Radnedge is adamant that Murweh is a great place to live and raise a family—he’s a father of three—and that the community’s greatest asset is its people. As an example, here’s a much-loved story that’s been doing the rounds for a while at the LGAQ:

Two motorists, a man and a woman, struck up a conversation while they were putting air in their tyres at a suburban Brisbane service station.

The woman said she was starting out on the drive home to Roma, to which the man said he had spent many decades living out west and, in particular, in Charleville.

The woman replied that she had recently visited and that she and her husband love it there—and, in particular, ‘this beautiful park in Charleville’.

Only she couldn’t quite remember the name of what she was certain was absolutely ‘the best park in all of Queensland’.

“Are you talking about Graham Andrews Parklands?” he asked.

“It’s nice to meet you,” said the former Mayor of Murweh, “my name is Graham Andrews.”

The story of how the Parklands came into being is a local government triumph and one of those Outback ‘mad’ ideas that’s turned out to be a good one. If you’re heading out Murweh way, do make sure you have time to explore the Parklands for yourself.

Finally: why is the Mayor known as ‘Zoro’?

“When I was 10 years old—so 40 years ago— at the Charleville Show Mum dressed me up as Zorro and … my schooling probably wasn’t the best, so there’s an old guy there, Mickey Burns, and he started calling me ‘Zorro’ and it’s just stuck.

“And the one ‘r’; I’ve always stuck to that because I like to be a bit different as you know.