At the recent LGAQ Annual Conference, two inspiring and hard-working women from the Aboriginal community of Pormpuraaw, May Ballie and Myrtle Foote, were awarded the inaugural Alison Woolla Memorial Award, for recognition of their significant, local contribution to awareness and prevention of domestic and family violence (DFV).

May and Myrtle were jointly awarded for their work in establishing the Pormpur Paanthu (Women’s house) in Pormpuraaw, which provides a refuge and services to assist women and children experiencing domestic and family violence. The centre also offers support services for men and a safe place for children through vacation and after-school care. Many lives have been saved and an entire community has come to better understand and manage domestic and family violence as a result of the centre’s work. May Ballie, said the journey had not always been an easy one.

“When we first started out, we had women getting bashed up, and no other stronger people used to stand up and take women in. We used to take them in,” May said.

“The main thing was about children and the wives—looking after them.”

“Back in those first days, we didn’t have counseling—we had to talk to the women and the men ourselves.”

Of her experience, Myrtle Foote said despite the difficulties, there were some wonderful breakthroughs.

“When the council came back to me and said they have got a house available for the women, that was a relief for me, you know, I was so happy that women can go to the place where they can be safe. It was a big relief for me,” Myrtle said.

“I’m so proud of working with my people in the community, with women and children especially.”

The late Alison Woolla, after whom the award is named, was the first female Mayor of Aurukun and was a fearless defender of domestic violence victims, often opening her own doors to members of the community in need. The recently elected Mayor of Aurukun Shire, Keri Tamwoy, the daughter of Alison Woolla, presented the award at the LGAQ conference. She says her mother was a huge support for many in the community.

“People would be dropped ‘round by the police at all times of night,” Mayor Tamwoy recalls.

“Victims of abuse would tell the police that they wanted to come to Mum’s house, as it was safe, and perpetrators would stay away because of the respect Mum had in the community.“

Mum would wake us up to help make up a bed and would say: ‘If we turn them away, they will go back to the abuse so let them stay, let them recover’.”

Mayor Tamwoy hopes the award will stand for the same qualities and values as her late mother did.

“There was no women’s shelter at that time, Mum helped get one in the region,” Mayor Tamwoy said.

“Mum never called perpetrators bad men. She tried to educate them and told them they could change. 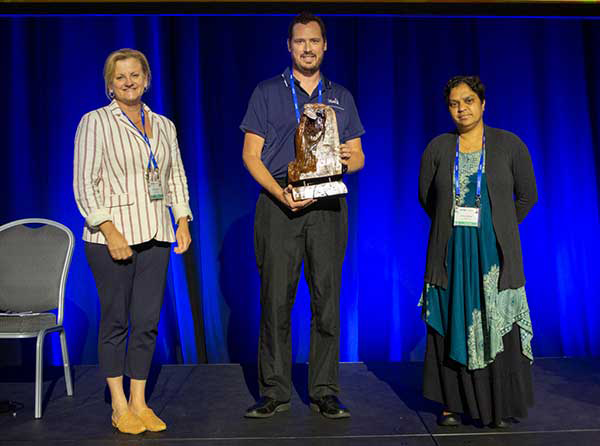 A high calibre of entries

“The entries we received show the extraordinary work that is being undertaken across the state to end domestic violence,” Jim said.

“These are often unsung individuals and organisations who are working tirelessly in social work, legal representation, policy, advocacy, and campaigning.”

The other two finalists, amongst 18 entries in total, were Famin Ahmed and Rosemary Skelly.
Other entrants included Betty Taylor, Nicolle Edwards, and Sonia Colvin.

A young lawyer in Brisbane, Famin started an Instagram page @famin_makes when she saw firsthand how under-resourced the Women’s Legal Service QLD (WLSQ) is. The full-time lawyer uses her spare time to sew hats and scrunchies out of donated fabrics. She then donates 100 per cent of the proceeds to the WLSQ. Famin started the project in May 2019 and, as of December 2020, she has raised more than $27,000 for WLSQ.

Rosemary has been working on a volunteer basis in the Redlands, raising awareness of domestic and family violence and helping survivors, for more than 30 years. In 1987, she became president of a working party that subsequently became the Redlands Domestic Violence Action Group. In its infancy, the organisation raised awareness and funds to support DFV survivors at a time when emergency relief was not readily available. The organisation ran bush dances and raffles to raise funds. The action group initially struggled to gain acknowledgment that domestic violence existed in the local community. The Maybanke Association is now a well-established organisation and is well respected by the community and government. A key driver behind the association’s success, Rosemary has gone on to hold several roles within Maybanke, always working tirelessly to end family and domestic violence and to build the reputation and strength of the organisation to ensure high-quality local support services and emergency accommodation are available in the Redlands.

Betty is a community advocate and domestic and family violence prevention campaigner. Ms Taylor has actively worked to prevent violence against women for over 30 years and continues to find ways to change the ending by stopping domestic violence deaths. Among her many successful achievements she has established the Red Rose Foundation and the hugely influential Red Bench Project.

Nicolle is a dynamic leader who takes a multi-pronged approach to dealing with a rapidly increasing problem. She works tirelessly to educate and empower people to end domestic violence—not only by working with front-line agencies to support women and children who are at the highest risk, but also by working to change the attitudes and behaviours that lead to abuse. After founding RizeUp Australia in 2015, she served as the Founder and CEO. RizeUp’s expertise is in domestic and family violence and as a primary prevention organisation. RizeUp has been recognised as a leader in the field, named the 2019 Community Organisation of the Year (Volunteering Services Australia).

Sonia founded Hairdressers With Hearts (HWH) in 2012 and has provided personal help to nearly 200 people. HWH provides information and support for victims of abuse in the safe environment of a hairdressing salon or barber shop. HWH has devised a training program fo all hairdressers and has built on the close and trusted bond between hairdresser/barber and client.

May, Myrtle and Alison are just some of the many women across the country who are working tirelessly and agitating for safe spaces for victims of domestic and family violence in indigenous communities. In Derby, Western Australia, Senior Nyikina woman Lucy Marshall AM raised awareness of DFV, was a mentor to women, and fostered more than 50 children rescued from abusive homes. In Fitzroy Crossing, West Kimberley, the leadership of Bunuba women June Oscar and Emily and Maureen Carter meant the town was transformed due to their action on detritus created as a result of ungoverned alcohol sales. Teacher, policy and liaison officer and Indigenous leader Eileen Cummings, a member of the Rembarrnga Ngalakan ethnic groups, has battled against family violence for decades across the Top End and was a co-author and coordinated the consultation in the development of the Aboriginal Family Violence Strategy. There are many, many more Indigenous women across the country working to prevent domestic and family violence. It is the type of work, however, that can come with a cost—burnout, exhaustion and sometimes hostility, blame and threats of violence.

So, how can these women be supported? Larissa Behrendt, an Aboriginal Australian woman of the Eualeyai/Kamillaroi peoples, legal academic, writer, filmmaker and Indigenous rights advocate, says we firstly need to ask the right questions.

“I thought about how often I am asked by mainstream services working in issues that greatly affect Indigenous women—including domestic violence—about how they can get Indigenous women involved in their programs.”

“It seems to me that this is the wrong question. Rather than asking about how to get more Indigenous women to work on the programs they have designed and are running, perhaps the questions should be how those organisations can support the work Aboriginal women are trying to do within their own community. Empower them to be even greater agents of change within their communities.”

Providing a voice and funding, says Behrendt, is also vital.

“They have no voice, no media platform, and no influence. They spend more time doing and no time talking about what they are doing on the most difficult parts of the frontline.” “Funding Indigenous community-based and controlled organisations to do the essential work to deliver the programs and support to Indigenous people who are the victims of family violence, and trying to escape it, is an important step.”

Simply listening though, says Bernhadt, can make all the difference.

“And perhaps the most important thing is to listen to what they know, what they have learned and what they believe needs to be done and support them to do it,” she says.

“Our level of government is closest to the community and as a matter of practice, councils strive to make their communities safer for all,” Mayor Jamieson said.

“The establishment of this award is an opportunity for the local government family to reinforce its commitment and recognise the vital work being undertaken by individuals in our communities, so I encourage all councils to help spread the word.”

“With 77 councils across Queensland, some of which are remote, Indigenous or isolated; having a single point of contact to help coordinate resources and advocate to the State Government makes a great deal of sense,” Mayor Williams said.

“This kind of partnership initiative is exactly what we want to see more of in Queensland, organisations using their power and influence to do good right across the state.”