THOUSANDS of jobs will be created or supported across Queensland following a State Budget commitment to the successful Works for Queensland program and a funding package for South East Queensland (SEQ) councils.

Mayor Jamieson said the LGAQ would continue advocating on behalf of its 77 member councils for the Government to permanently fund the Works for Queensland program at $100 million a year going forward, as well as $50 million a year in ongoing stimulus funding for SEQ councils, to ensure these programs can continue to support local jobs and communities at this critical time.

“Queensland councils, as the grass roots level of government, are at the centre of the State’s economic recovery,” Mayor Jamieson said.

“Local government knows where job-creating stimulus needs to be spent and how to spend it to ensure it makes the biggest impact.

“This has been proven through the success of the Works for Queensland program which, combined with the special COVID-19 allocations announced in response to the LGAQ’s Battleplan for Queensland Local Communities, has created more than 26,000 jobs while at the same time delivering local communities the infrastructure they need.

“This Budget commitment will mean this critical stimulus funding will continue to create jobs where they are needed most, from the Cape to Coolangatta."

Mayor Jamieson said the LGAQ and its member councils would continue to advocate for funding for other critical programs like a $500 million program to guarantee safe drinking water for rural towns across Queensland, and a 10 per cent increase to State Government Financial Aid (SGFA) to First Nations Councils.

“A 10 per cent lift to SGFA would only cost the State an extra $3.5 million a year but its impact would be lifechanging for First Nations councils and their communities, helping to not only retain workers but to boost employment and training opportunities,” Mayor Jamieson said.

Councils will also continue to advocate for an increase in the amount of funding allocated to the Transport Infrastructure Development Fund to ensure local government can continue to roll out much-needed road maintenance and upgrades at a level the Queensland community expects.

“Without a funding increase, this program will no longer be able to keep up with the demand for safer, more productive roads throughout regional and remote Queensland,” Mayor Jamieson said.

Click on the image below for our State Budget infographic: 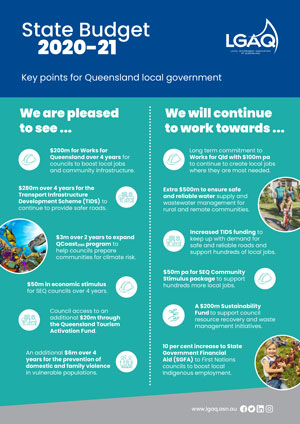