Their football rivalry is legendary.

Think of the uncompromising characters who forged life in the Outback and then set 13 of them against 13 more on a footy field… it’s that calibre of legendary.  So, what has brought together Longreach – ‘the Heart of Outback Queensland’ – and Winton – ‘the Dinosaur Capital of Australia’? A major destination marketing campaign that promotes the two regions – together, equally – to audiences in the city and beyond.

The co-promotion agreement was struck last year for a cross-media campaign featuring television commercials shown in metropolitan markets, including Brisbane and Sydney, along with major regional coastal centres. The TV ads were augmented by a targeted social media campaign and a special destination website that publicised the best of both regions.  The two councils signed a Memorandum of Understanding in 2019 to work together on tourism, which led to the development of the Longreach and Winton Sub-Region Tourism Activation Plan 2019 – 2024. The Plan aims to maximise more than $50 million in State and Federal Government funding that has been invested in new tourism product between the two communities in recent years. 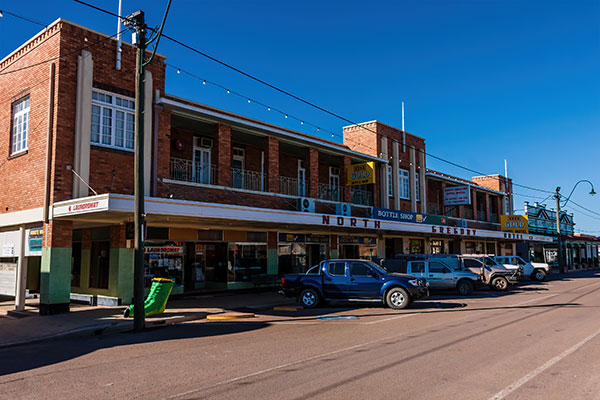 Winton is the Dinosaur Capital of Australia, home of Waltzing Matilda and Queensland's Boulder Opal; abundant in nature, culture, and heritage.

Winton Mayor Gavin Baskett says the Plan is the result of work carried out over the past couple of years.

“I think if we work together, we can attract way more people to the region rather than trying to do it alone,” Mayor Baskett said.

“Between the two of us, we have the biggest attractions in Outback Queensland but we also have the most product, including a lot of mature wholesale product that’s already built around visiting Longreach and Winton together,” Mayor Rayner said.

While both regions abound with stunning natural attractions – Longreach is famed for the Thompson River and its ‘beach’, Winton for Bladensburg National Park, and both for their unparalleled majesty of their night skies – it is the four big attractions that resonate loudest in most parts of the world.  The Australian Age of Dinosaurs Museum in Winton houses the largest collection of Australian dinosaur fossils in the world and the collection is so extensive it is split between three facilities - the Fossil Preparation Laboratory, Collection Room and Dinosaur Canyon. The Australian Stockman's Hall of Fame & Outback Heritage Centre might be in Longreach but it celebrates the national contribution of a wealth of bush pioneers. Even if you’ve already visited, a return will be well worth it when refurbishments are completed in early 2021.

Winton is home to the Waltzing Matilda Centre, which was magnificently re-built after a fire in 2015.

Banjo Paterson wrote the words to Australia’s unofficial national anthem at Dagworth Station, near Winton, 125 years ago and the song was first performed that same year (1895) at a gala banquet for Queensland Premier Sir Hugh Nelson, held at the North Gregory Hotel.

It’s a shame the Premier’s response wasn’t recorded for perpetuity: Sir Hugh had been a station manager on the Darling Downs before running for Parliament and you might wonder if he had much sympathy for the swagman’s plight – and watery demise. You’d imagine it likely the Kilmarnock-born Premier would have already been familiar with the new song’s melody, as it was based on a march that was derived from an 1818 Scottish composition, "Thou Bonnie Wood of Craigielee” – which, like “Waltzing Matilda”, started life as verse looking for a melody. 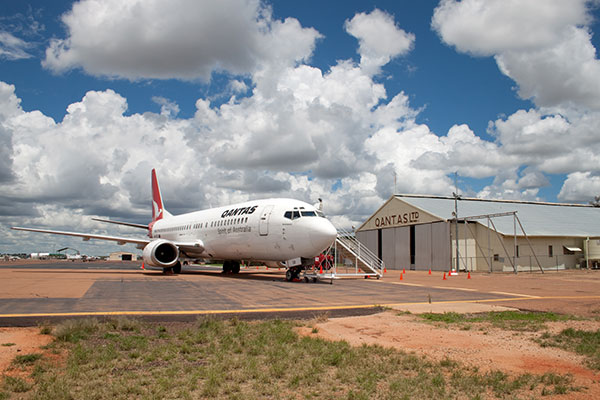 That leaves one of the ‘big four’ but don’t get the Mayors started on the national carrier.

“Yeah, they never let us forget that Winton was the town where the company was formed before relocating to Longreach,” Mayor Rayner quips.

“But that’s just the point – you have this incredibly remote part of the world that those founders decided could be linked by an air service.”

The recently upgraded Qantas Founders Museum (in Longreach) tells the remarkable story of Qantas Airways from its first flights in Outback Queensland in 1920 to a global success story, that is also one of aviation’s most loved operators.  Recently returned World War One veterans Paul McGinness and Hudson Fysh realised that Australia was ripe for an air service that connected it to the world. The two were looking for a new challenge after completing the first overland motor survey of northern Australia… in a Model T Ford.  Fergus McMaster, the founding chairman of Queensland and Northern Territory Aerial Services Ltd, claimed Qantas was “inspired by the spirit of ANZAC” and the people of western Queensland signed on with enthusiasm through purchasing shares in the fledgling airline – and seats on the first flights across the region.

The airline’s first passenger was 84-year-old Outback figure Alexander Kennedy, who sat in one of the Avro 504K’s two seats for a flight from Longreach to Cloncurry.

Kennedy, like Governor Nelson, was born in Scotland – and his reflections on holding ticket number one are also, sadly, unrecorded for history.  Overseas connection wasn’t made until 1935, with services between Brisbane and Singapore that took three and a half days in a de Havilland Express (DH-86) aircraft. Today it takes eight hours.  QANTAS’s centenary is on November 16 this year and the Founders Museum has special celebrations cleared for take-off.

Mayor Baskett believes the first piece of the Activation Plan has well and truly delivered for both regions.

“I think this has been a success because we’ve noticed over the last few months since the state’s been re-opened, that almost every night these two towns are full,” he said.

“Hopefully, this can continue for another month or so.” 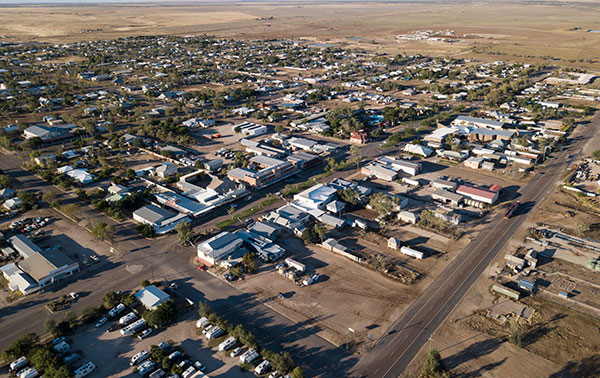 The town of Winton, Queensland.

Mayor Rayner believes the regions are now being visited by a new type of adventurer.

“For one thing, this is the first time we’ve ever bought metro media. By pooling our resources, we’ve been able to extend the scope of the campaign and reach new markets at an important time,” he said.

“We’re seeing clear evidence that it’s working too, it’s a different visitor demographic arriving in our region at the moment – many of them after cancelling overseas holidays. We’re also still getting strong support from our traditional markets.

“There’s been extremely strong forward bookings ever since the campaign went to air and it’s not slowing down yet. The school holidays have always been a busy time for our region – for the last few years, visiting during school holidays has meant booking weeks in advance. But this year, that scenario has played out beyond those times as well.”

And there are strong signs that, despite the difficulties in so many areas of the economy, the drive for a year-round tourism model might come to fruition.

“Longreach is the only airport in Queensland that has returned to pre-COVID passenger numbers – and not only that, we’ve grown them,” Mayor Rayner said.

“Most operators have strong bookings through to November – so we’re quietly hopeful that we’re in for a busy summer season as well.”

As with the Longreach-Winton tourism partnership, some of the Central West League’s long-established footballing rivalries have been put aside to consolidate and ensure a future for the 100-year-old-competition.   Longreach and Ilfracombe have joined forces, as have Winton and Diamantina, while Alpha returned this year, after 15 years off the paddock, to join Barcaldine and Blackall in the six-team roster.

The driver for the competition’s current line-up is one facet of Outback life that too often unites all communities: the drought.

It sees teams struggle to keep sufficient numbers in their playing groups and, in the case of the Ilfracombe Scorpions – who were forced to relocate home games to Longreach after drought dried up their footy ground – the greater good of the community rightly prioritised over sporting facilities. The stunning television commercial says experiencing Longreach and Winton is “the perfect start to your Outback adventure” and, just a few months into the start of this pioneering partnership, it appears plenty of visitors have caught on. Maybe a few will stick around for a game of footy when the season fires up again.